Welcome to the Carnival of MS Bloggers, a bi-weekly compendium of thoughts and experiences shared by those living with multiple sclerosis.
Hope, Thanksgiving, and Community

The Cure for Multiple Sclerosis, You Bowl Beepers
by Diane J. Standiford

Once upon a time there was a little girl who had MS. She lived in Indiana with her Auntie Vi, Uncle Arthur, and Mother Rosie. She loved her life with her family, but dreamed of a place faraway, a place full of adventure and a cure for MS…some place over the rainbow.

One especially dark night, there was a tornado that blew the little girl up, up, and away. When she awoke, she was in a very strange land and she was afraid. She saw a sign: “Welcome to the Emerald City, Seattle!” Before she could think about that, a blue seagull flew over her and sat down in front of her.

Then muttering something through his beak, he flew away, leaving Diane all alone again. She grew frightened and wondered aloud, “What should I do? Where should I go? I have MS and I’m scared.”

Diane saw before her a path of yellow. With each step she encountered an odd sensation: vertigo, stars in her eyes, numb feet, weak hands, piercing migraines, depression, and a heaviness in her legs. As she walked further, she saw a corn field ahead and hoped there might be a cob to snack on. If only she could make it one…more…step… suddenly Diane felt a soft tap on her shoulder.

Standing behind Diane was a beautiful woman in a billowing dress holding a wand with a bright white star on the tip. “Dear, where are you headed?” spoke the gentle lady.

“I’m looking for a cure for MS,” said Diane with great authority. “WHO are YOU?”

“I am the good witch of the north. The person you seek is the Wizard of Plaus; he is very plausible.”

“You must stay on the yellow sick road. But be very careful along the way,” said the good witch as she started to be blown upward, “the wicked witch of the west coast is never far away. Stay on course, my precious child. And good fortune to yooooooou,” her dress blew up like a sail and she floated into the clouds as silently as she had appeared.

“No! Don’t leave me all alone with MS!” cried Diane.

“Oh, my sweet, dearest, ugly, little slime. Your MS is my delight. T-Cells! Take flight! Attack her nerves! Eat her myelin.” Rubbing her mole infested rumpled hands together, the wicked witch of the west, gazed into her foggy magic ball as the winged T-Cells and viruses began flying out the cracked windows of her crumbling castle walls. With her 13 inch fingernails she grabbed a passing T-Cell. “And don’t forget her spinal cord and brain.”

“BREAK THE BLOOD BRAIN BARRIER!” they screeched as they flew.

Diane fell near the corn field. Looking up at the pastel sky, two large eyeballs stared back at her! “AHH!” she screamed to an echoed “AHHH!” from the scarecrow attached to the eyeballs. “Who are YOU?” asked the scarecrow. “I’m Diane. I need to talk to the Wizard of Plaus. I need a cure for MS.”

The scarecrow helped her up. “Mrs? Miss?” “No, no, MS—Multiple Sclerosis. It is a disease of the central nervous system.” The scarecrow frowned; his stitched rag mouth turned upside down, “Oh, the brain. If I only had a brain. I’m going with you and ask the Wiz of Plaus for a brain.”

Off the two went, both falling and getting back up as they moved, neither expecting what jumped out in front of them---a lion! He roared so loudly that the straw blew out of the scarecrow and all that remained was his hat and two button-eyeballs. “Look what you did!” shouted Diane.

The cowardly lion hit his head with his giant paw. “Aw shucks. I’m so sorry. What was I thinking? You both came upon me out of nowhere and scared the fur balls out of me. What are you doing way out here?”

The scarecrow’s stitched rag mouth started speaking. “We are going to see the Wizard of Plaus. She wants a cure for MS and I want a brain. Now help put me back together. With that said, he directed the lion and Diane exactly how to build him back together. “I am, am, am, I mean if you don’t mind, I um, would like to, uh, go along and, well…well…”

In unison Diane and the scarecrow impatiently barked, “Well, WHAT?!”

With his tail between his legs, the lion said meekly, “Ask for some courage?”

After continuing along their way, the troop of three soon saw an enormous structure rising high into the sky, up into space like a needle. The Emerald city’s Wizard of Plaus was only a skip, or twenty, away. SQUEEEEEEEEEL 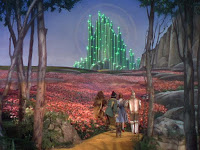 What was that, they wondered. KEEERRR-PLUNK. In their path a tin can fell. “Help me. Please help me.” Diane thought--- what next? A talking scarecrow, a cowardly lion, and now a talking tin can? A glance to the right showed that in fact this was the head of a tin MAN! The scarecrow took off running, returned with an oil can and began to oil and reconnect the tin man’s head.

“Oh, that feels chicken-biskets good! Thank you. Who are you wonderful creatures?” asked the well-oiled tin man. After introductions were made the troop became four. The tin man wanted a heart. But before they began to skip, the flying T-Cells and viruses had arrived. They swarmed Diane, causing her body to stiffen like iron.

“Lion, swat them!” commanded the scarecrow, “Tin man, put your cool metal on her. I’ll give her my stick arm to walk with.” The tin man wrapped his cool arms around Diane and the lion bit and swatted the T-Cells until they gave up and flew away.

The wicked witch of the west coast was furious at her immune system “mission unaccomplished” and she took a step outside to shoot her returning warriors with Solu-medrol; but the Emerald city rain dealt her a deadly blow. “I’m melting.” The Seattle rain melted her away forever. Her anger blinded her to the effect fresh rain had on her.

“We are here,” said the troop as they eyed the huge tower. A guard with a bad haircut blocked the entrance. “Don’t worry,” said the tin man, “he is the bill and gates keeper; just throw apples at him and he runs away.”


“WHO GOES THERE?” bellowed a booming voice from the top of the space jousting needle. The lion began to shiver and the scarecrow turned to leave, stopped only by the tin man. Diane spoke, “I want a cure for MS. Scarecrow wants a brain, Lion wants courage and Tin Man wants a heart.” “GO AWAY” Go away? That’s it? “Look, an elevator, let’s go to the top,” said the scarecrow. Up they went until the doors opened and there, standing with a microphone was: Madonna.

Diane couldn’t believe her eyes. “YOU are the great Wizard of Plaus?! You are just Madonna!”

“Excuse me? JUST? I am a music legend, a cultural icon. Yeah, I’m a frigging wizard too AND I write children’s books. I’ve been watching you. You are all jerks. Lion. You want courage? YOU’RE A FRIGGIN’ LION, King of the Jungle. You gave an arse whuppin’ to those T-Cells. Tin man, woe is me; you want a heart, WHAT ARE YOU A VIRGIN? You hugged Diane when she was down. You cared about her. That takes heart, you dope.

And YOU, scarecrow, you want a brain? WELL JOIN THE CLUB! You figured out how to save Diane and fix tinny and put your own SELF back together WITHOUT YOGA OR BOTOX. You bowlbeepers already HAVE what you want.

The lion let out a roar that shook Mt. Rainier; the tin man felt his heart beat; the scarecrow straightened his hat and stood tall…Diane walked slowly up to Madonna. “What about me? Where is my cure?”

Madonna took off her cone bra and put her hands on her hips. “Listen Kid, right now there is only one cure for MS that’s plausible, and the good witch gave it to you the moment you landed in Plaus; and that is hope, a belief that if you just follow your dream anything is plausible. Anything is possible."

A few discussions floating around the MS Community blogosphere:
Lanette returns from her wedding in Jamaica. Yeah Mon, photos included.

Nadja, the Denver Refashionista, is Cured!! No, not that kinda cured. Go read.

Anne thanks everybody for More Success!! in raising funds for Herrad's cushion. I thank you too and Herrad received the funds yesterday. Whooohoooo!!

Richie, Herrad's Sweetie, shares what a typical day entails for a caregiver. Thank you Richie for all that you do.

And Serina shares a favorite Christmas Story about Big Wheel in Indiana.

This concludes the 24th edition of the Carnival.
The next Carnival of MS Bloggers will be hosted here on December 11, 2008. Please remember to submit a post (via email) from your blog of which you are particularly proud, or which you simply want to share, by noon on Monday, December 8, 2008.