MS has taken some things away from me, or the ability to do some things. A little over two years ago, we sold our two-story home and bought a ranch that is on 1.25 acres. A few months after that, we bought a riding lawnmower. I mow the yard. 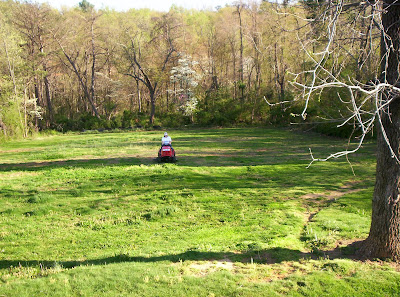 That lawnmower has given me so much pleasure! I have a responsibility to do that I absolutely love doing. When I'm on the mower, I have a sense of pride and I have a whole lot of fun. Once I mow the front and sides, then the fenced-in part in back (Montana's yard), I get to do the "back 40". This is a huge part with slopes. Have you ever mowed going down a slope? Sometimes I pretend I'm on a rollercoaster, let it rip, and yell all the way down! It's given me back a little bit of myself that had I lost.

Read the rest of Maryann's post here. Then see how she is Cooking Up A Storm.


I fixed these two recipes yesterday and today. My energy level is low, so I can't do too much at once but Montana needed more cookies for dessert, and I needed to make him more grains. I found buckwheat at the food co-op, plus bought two pounds of millett because that's the only place I can find it. Buckwheat (or kasha to us Jews) is cooked like millett except for one added ingredient--egg white.

How to Cook Buckwheat

Add 1 cup of buckwheat groats to a heated skillet, and add to it a beaten egg white. The egg separates the kernels as they cook, which prevents the groats from sticking together. Stir the buckwheat/kasha and egg mixture until each grain is separate and dry. Then, add 2 cups of boiling liquid, either stock or water (I added water), and a dash of salt. Simmer the mixture for 30 minutes or until the liquid is absorbed. I let this cool, then divided it into separate portions in zip-lock bags.

Crunchy Oatmeal Dog Treats
Mix all ingredients together. This mixture is a little sticky, so I floured my hands to work with it. You can make these big or small. Roll into balls and place on a greased cookie sheet. Bake 14-15 minutes in a 350 degree oven. Cool on paper towels. Can be stored in fridge for up to 2 months.

Tomorrow is Day One on Solu-Medrol. On Friday the company called to set everything up. They asked if they could drop off the supplies later that day, so I said sure. A gentleman arrived carrying an IV Pole, a white bag full of stuff, and a large silver envelope containing the medication. I put the Solu-Medrol in the fridge and put the rest of the stuff where the girls couldn’t get to it.
Later that evening, I took a peak to see what was inside. Me and my curiosity! There was a crazy amount of stuff in there. It was all of the stuff I try not to see while in a hospital. I was not ready for that. In case you have to do IV steroids or are helping someone else who is, I took a picture of all of the stuff and thought I’d share it so that you’d know the kind of stuff that was coming:
In case you are wondering what on Earth all of this is, here’s the packing list: 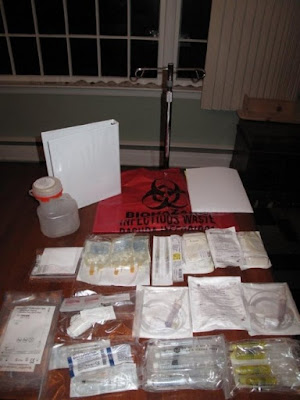 3- 1000 MG Solu-Medrol/Minibags 116.00ML
4- 50MG Diphenhyd/0MG Epinephri 1ML (Just in case I’m allergic)
3- ADM. Set-Gravity w/dial-a-flo 1 EACH
20- Alcohol prep pads
1- AOB (Assignment of Benefits form)
1- bag, Infectous Waste
3- Catheter 24 GA Insyte Autogard
1- Estimated Insurance Form
3- Extension set 12″ Smartsite
4- Heparin Flush 100 Units/ML 5ML Prefilled
2- Infusion end caps
1- IV Pole
3- IV Start Kits
1- Manual (More paperwork)
3- PICC Shower Barrier
1- Sharps Container, 1.3 QT
8- Sodium Chloride Flush 5 ML, prefill
1- Start OC/Restart/Change Pt Info Pkt
2- Syringe 1CC TB 25g 5/8″ Safety Glide
2- Syringe 3CC 23GX 1″ Safety Glide
The nurse is coming tomorrow afternoon and I’m trying to stay calm, but it’s not easy. I’ve always hate IVs, not that anyone likes them, but I truly hate them more than the average person. Here’s one example. The best thing about Little Sister’s delivery going so quickly was that they didn’t have time to get in the IV. I clearly remember being told it was too late for the epidural, but the next words out of the nurse’s mouth was that it was too late for the IV, which was the best thing she could have said. When I first started writing I’m sure I mentioned that I hated needles. Well, needles are a thousand times better than IVs. IVs gross me out because they actually stay in my body. At least needles come right back out.
When the nurse called this evening to set up the visit time, I asked if she’d keep the IV in or do a new one each day. She said she prefers to leave it in. I’ve never had an IV in that long. The longest has been about 24 hours and that was the most I could tolerate. Not only does the needle gross me out, but my skin is so sensitive that I have a lot of trouble keeping on adhesive tape for that long. This is going to be interesting. I said I’d like to talk with her about it tomorrow, after I see how good she is at getting in the IV (I didn’t tell her that last part.) That’s the other thing, it’s rather hard to get an IV into me. During a previous surgery they had to try 3 different spots before they could put me under and I woke up with it in a 4th spot. I was so black and blue that I looked abused for weeks. I have faith that this woman will be better than whoever it was that did that to me. I’m also going to drink a ton of fluid tomorrow morning to make sure my veins are as cooperative as can be!
I’ve scanned a few things others have written about their experiences and tips. I think they may have just freaked me out more. I really don’t have any idea of what to expect. I think I’m about as educated as I’m going to be and I should probably stop searching for more info, just do my nightly shot, and call it a day.

Six months ago I never expected that I would have spent this past weekend doing the MS Walk in Ocean City, NJ. Six months ago I didn’t even know I had MS. A lot has changed in the past half year.

The first time I heard of MS is when someone asked me to donate to the MS Walk. I have cousins who do the walk every year and I’ve always donated to their efforts. Earlier this year I thought about doing a walk, but at the time my girls didn’t know I had MS. My girls know I’m a crew captain for the Breast Cancer 3-Day and that’s their only frame of reference for a “walk.” I do that in memory of a friend who lost her life at the age of 35 after battling breast cancer for only nine months. I still remember when she came to Big Sister’s birthday part in April 2007 and said she had just found a lump while nursing her baby.

From there it was a rapid slide from Stage 2 to Stage 4 breast cancer. She passed away just before Christmas 2007. I wasn’t sure how to tell my girls that Mommy has something people do walks for. I had a difficult time getting past that since they know I do the 3-Day so that other girls won’t lose their mommies like our friend’s family lost theirs. Even once we told the girls last month that I have MS, I still wasn’t sure how to tell them about the Walk. I didn’t want them making any connections between the 3-Day and the MS Walk. Yes, MS is important enough to walk for, but we’re not doing this because it can kill Mommy, because it won’t.

My last MRI is what motivated me to sign up for the MS Walk. I felt helpless knowing that there are a ton of lesions on my spine. That was quite a shock after thinking things were pretty good with only 3 spots on my brain. Other than staying on my daily drug and doing the steroid treatment, there wasn’t anything I could do about it. Then it occurred to me that there certainly is something I can do about it. I can walk. I can ask friends to walk with me. I can ask friends and family to support me. Together we can all do something about it. We can raise money and awareness to fight this for me and the thousands of others like me. It was empowering to take on this challenge.

Soon after I registered, four friends and someone I don’t even know (a friend of a friend) joined to walk with me. I was so elated! It all came together very quickly and in less than a month our team raised $1,000! As important as raising the money and doing the 4 mile walk (which was a bit of a challenge for me) was the time I got to spend with these amazing ladies. We’re very fortunate to have access to an old beach house, so we made an overnight of it. We had great food and great conversation. A get-away was just what I needed after Day Ten on Prednisone. Many of the ladies are walking the 3-Day this year, so it was a nice training walk for them. We even reminisced a bit about our friend who passed away. She would have appreciated that we had a few laughs when thinking about her.

While it’s hard to fundraise for two important efforts, I decided that I’m going to give it my all and hopefully continue to make a difference for both. From Mother’s Day through October, I’ll focus on the 3-Day. Now from October through May, I’ll focus on the MS Walk. Next year I hope to be able to do VIP Check-In. We all deserve a world free of breast cancer and free of MS. I hope I can do my part.


This concludes the 35th edition of the Carnival.

The next Carnival of MS Bloggers will be hosted here on May 21, 2009. Please remember to submit a post (via email) from your blog of which you are particularly proud, or which you simply want to share, by noon on Tuesday, May 19, 2009.