Takes A Village and the Americans with Disabilities Act


It takes a village…..or at least it’s better that way
by Michael Gerber

There are always at least two ways to do everything. Right or wrong. Good or bad. Alone or with others.

Having people in your life and being involved with others is a great reminder that you are alive and worthwhile. It can also help one forget about their troubles for awhile and that is always a good thing.

I recently read an article about isolation (InsideMS /Healthy Living / Isolation) that was written by my friend Alison Dale. It turns out that isolation is a pretty big problem in our MS community and is often a problem for anyone living with a chronic condition. I am guessing that it is a problem for many people without a chronic condition as well. (Isolation can lead to depression and that can be a serious problem. If you or someone you know suffers from depression, please get help.)

There are many reasons why and how a person becomes isolated. Some may have to do with physical limitations or disability. Some with fatigue and sometimes it is just the belief that no one understands or cares. Whatever the reason, isolation means being alone and being alone is no way too spend all of your time.

If you are alone and don’t want to be, do something about it. Call a friend and invite them over. Go to church or temple and find ways to get involved there. Join a club or service organization. Volunteer. There are hundreds of ways to get involved with others and millions of nice, caring people in the world. Finding them is not difficult. It just requires a little initiative.

If you are not a likable person, become one. Learn to ask questions of and about others and listen to their answers. Practice gratitude. Say hello to strangers and learn to smile. You will get back what you put out and will soon find that you have created your own community.

If you are not alone, go find someone who is. Make a difference in someone else’s life. You will both be glad that you did.

Life is better when you have people to share it with. For some people that may mean marriage or family. For others, it may mean friends or belonging to a group.

Having a full, rich, meaningful life requires people to be in it. In my case, it takes (or at least I have) a village.

Participate. Make a difference. Live a life that matters. 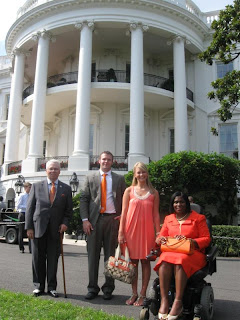 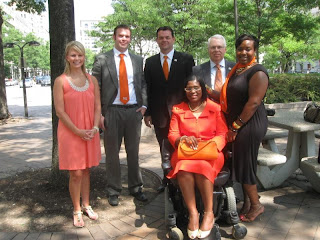 
On July 26, five MS activists from around the country were invited to the White House to celebrate the 20th anniversary of the Americans with Disabilities Act (ADA) being signed into law. The ADA established a clear and comprehensive national mandate for the elimination of discrimination against individuals with disabilities, guaranteeing equal opportunity for individuals living with disabilities in public accommodations, employment, transportation, state and local government services, and telecommunications.

The invited MS activists were able to hear President Obama in his remarks give due credit to the grassroots origin of the historic law, stating that “It began when Americans no longer saw their own disabilities as a barrier to their success, and set out to tear down the physical and social barriers that were.” Click here to view the full video or read the transcripts of the ceremony.

President Obama also shared his personal experience and the strength of First Lady Michelle Obama’s father, who was diagnosed with MS yet never missed a day of work and kept moving forward (viewable at approximately minute 33 of the full video). Ongoing efforts to ensure that the ADA realizes its full potential were also highlighted. These efforts include newly issued regulations from the Department of Justice protecting disability-based discrimination and requiring all new buildings to be compliant with 2010 accessibility standards; upcoming rules that will promote the accessibility of websites; and the launch of the Year of Community Living initiative to uphold the principles of the Olmstead court decision and community-based care.

The celebration ceremony concluded with President Obama signing an Executive Order that establishes the federal government as a model employer of individuals living with disabilities—with the goals of better recruitment, training, and retention. 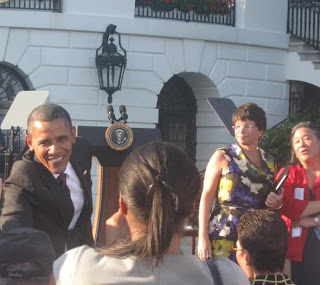 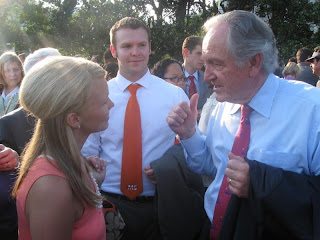 20 Years on, What Has the Americans for Disability Act Done for Me?
by Trevis Gleason


I’m not going to lie to you. I began writing this blog over the weekend and it was supposed to be posted on Monday. I’ve had a very difficult time trying to find the right angle to address this week’s 20th anniversary of the Americans With Disabilities Act (ADA).

There can be no doubt that the law has changed the very face of cities in which I’ve lived, sites I’ve frequented, and constructions projects with which I’ve been involved. I have also seen how non-compliance can adversely affect people more severely impacted with mobility issues than myself.

How, though, have the pages of this important legislation, now two decades old, had an impact on me?

I remember living in New England back in the 1980s, when our nephew would visit in his wheelchair, and how difficult old buildings and curbs without cut-outs could be to navigate. We learned to look at things with a whole new eye, a “less-able” eye (I should thank Jason for that opportunity. It has paid dividends on the dividends!).

I have also seen utter indigence on the part of many when shortcomings are pointed out in construction plans or when costly accommodations must be made – hell, they needn’t even be costly to ruffle some feathers.

I’ve only ever worked for one company that would have been considered large enough (some subsidiaries are even designed to be too small) to be required to comply with ADA regulations.

At this point in this piece, I should point out that I haven’t really had much need for the accommodations provided in ADA. Quite frankly, the days that I’m in that much need, I’m not likely to leave the house anyway…

But I do acknowledge that many things I have benefited from wouldn’t have been there were it not for the ADA, even if they’re not actually in the regulations.

Would cities really have concentrated so much on para-transit? Would everyone else in my community give off to the person who parks in a disabled space without sticker or need? Would the community even see as many people using walkers and scooters and chairs were it not for a 20-year old law which has made it easier for them to live a life out in the town?

I don’t know, I don’t really know, how my life has been directly impacted by ADA. Possibly many of you feel the same way, as a number of us have been diagnosed with multiple sclerosis far fewer than 20 years.

Maybe that’s the beauty of such a law; it has changed the very fabric of our country to the point where all of the changes begin to feel like the norm.

As we take a few moments to reflect on a law that (know it or not) has changed the country for all of us, I’d like to know how the ADA has changed your community, your life… your life with MS.

Wishing you and your family the best of health.
Cheers,
Trevis


This concludes the 68th edition of the Carnival.

The next Carnival of MS Bloggers will be hosted here on August 12, 2010. Please remember to submit a post (via email) from your blog of which you are particularly proud, or which you simply want to share, by noon on Tuesday, August 10, 2010.