THIS IS A DREAM I HAD
by Mary of It is what it is, until it isn't what it once was

﻿I found myself standing in a heavy fog. Trying to see through it I looked down at my feet, at first I couldn't see them. As the fog started to dissipate, I found myself standing on grass. I started looking up from my feet and seeing a field of grass. The fog was thinning I still couldn't see very far, but I wasn't afraid. Instead I was amazed at how peaceful and calm I felt.

I saw someone coming towards me, it was Rusty the dog I found when I was a child. As he came closer it looked as if he had the same ball he had when he found me. Running right behind him was Honey girl without a rock that had been her trade mark in life. It was odd but not surprising that we understood each other. We knew it wasn't my time to be with them yet, that I was just visiting.

As we were greeting each other, I noticed they both had all their teeth. I knew they always have toys, balls and someone to play with. They were so happy, we started running, playing catch and keep-away, Shadow showed up and we started to wrestle. Rusty was gnawing on my elbow, as Shadow was running around us, trying to distract Honey girl, as she was barking at me as I tried to grab her paws. Shadow joined us as it turned into a pet me, rub my belly, scratch my ear. With only having two hands the one not getting attention, was giving me kisses then all three were licking my face. I rolled around until I could get up and started running, then I turned and started chasing them. As we were playing I noticed that more dogs had joined in the fun. Some I knew very well, others knew me better than I knew them, but I remembered them all, it was nice to see them all again. Most didn't stay long but some did.

We came upon a lake that was clear and not cold, without a thought we all ran in with a big splash. As we came out of the water after swimming and playing. We went to lay in the shade of a large tree, I didn't notice before, but I was glad it was there. Lying there and realizing we hadn't stopped, because of pain or fatigue, it was so peaceful and quiet.

Then I heard a Loon's call, an eagle's cry; I began hearing all the sounds of the animals I have listened to throughout my life. Sitting up and looking around it was a beautiful scene. The sky was so blue, with puffs of small white clouds. The birds filled the sky; there were eagles, hawks and songbirds of all colors, shape and size. The sounds filled the air. I closed my eyes, as it became the most beautiful song I have ever heard. It filled my heart with joy and peace and I knew I would never forget how it fed my soul.

Rusty lifted my arm with his nose, as I started petting him opening my eyes, to see in the tree was Tony the squirrel. I had helped after he had fallen from the neighbor's house. He came down and laid across my shoulders. As I looked out at the lake and the field of grass and seeing all the animals I have watched throughout my life. I felt them welcoming me to stay awhile longer.

The cat's came over and started teasing the dog's. Standing up with Tony on my shoulder, we started playing again. It was so nice being with them all again running, laughing and playing. After a time most had gone, Tony climbed down off my shoulder and started walking away the fog was starting to roll back in. I heard a dog whine so softly and saw Rusty walk into the fog. The dream was starting to fade, I didn't want it to end. Calling Honey girl three more times as she walked towards the fog. She finally turned and smiled at me, I realized it was time to go.

The whining got louder waking slowly and calling Grey girl. As she came to the side of the bed, I tried getting out of bed but this is the real world and I still have M.S., so giving Grey girl hugs and petting her until I was able to get myself out of bed. The dream was gone, but the love will always be with me.

It was the best sleep I had in years, waking with so little pain for the first time. Knowing we will be whole again but until then, I'll settle for visiting them in my dreams.

Looking back to Look forward
from Nadja of Living! with MS

Lately I have been feeling some creative inspiration again and I have been looking back at old poetry and journals I wrote at age 23. I found a couple of interesting things. Many things are the same and many are different. Many of the images in my writing are still the same. I still love to be dramatic, and I still am in love with the idea of love :)

I also see the way life has changed. Every day is not a drama. The hard days are not as hard. One of the benefits of age is that it lends perspective. There are still hard days but I guess now I know that the good also comes with the bad. While one day may be a trial, the pain passes quickly and great moments can follow right behind tough ones. Since this blog is "Living with MS!" let me state that I have found these observations to hold true after living almost three years with this diagnoses.

One observation I can share with the newly diagnosed (with relapsing remitting) is that relapses do have an end. Sometimes when you think that some function is irrecoverable, it comes back. It is also easy to get lost in the idea that it's all downhill from the time of diagnoses. Not true: the course of this disease is different for everyone.

My first year was the hardest physically and mentally. At age 34, I am in the best physical condition I have been in since about age 16. I practice yoga every day and physically, I can run circles around my 16 year old students. I have enough perspective on the disease at this point to know that this could also change at any time, but this knowledge is also a gift. When you truly face your mortality and realize that things could change at any time, it makes you value each day of health even more.

The Perfect Love
from Suzanne of LIVING - Life With MS


In December of last year I was in my office and heard this *SPLAT* on my office window. I didn’t want to look. I knew what it was. But, I did look and there on the ground in the rocks was a small grayish bird alternating between breathing heavy and panting with its beak cracked open. Other than the breathing this precious little creature was not moving--at all. It was 20 degrees Fahrenheit outside and I figured in minutes, if it stayed there, not moving, in the freezing cold, it would be dead. I gathered up a shoe box and put a blue hand towel in the bottom of it for warmth.


I headed around the building and halfway around, there at the front door, was another little bird sitting quietly against the building, protected from the wind. It wasn’t the same bird I saw out the window; this one was a little thinner. I tiptoed in to get a closer look and I realized this bird must be the mate to the injured bird so I scooped him up in my bare hands and placed him gently in the uncovered shoebox and he just stayed there, quiet and still. I named him Reginald. 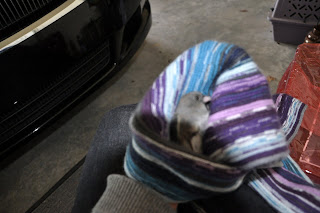 I went to the back of the building where I found the injured bird sitting very still-panting. I immediately scooped her up and placed her in the shoebox, next to her mate. I named her Chloe.

He maneuvered himself next to her, hopping sideways in the box.


I took them inside (I know, I’m lucky they didn’t take off) and let them warm up a bit and then I went out in the garage, left the door open and after a few minutes he flew out the door and went and perched himself in the small tree just off to the left. She still was not moving much but I took her outside and placed the box on the grass and just like that she took off and flew to him. I have to say, it was amazing and I felt like the “Bird Whisperer.”


It made me think—would I do the same? I’m not sure. I’d like to think I would but how can I really be sure. Recently, I told my husband, “You are the love I thought I would never have.” And I meant it. I can’t imagine, nor do I want to, a different kind of love or love with another person. So, yes, I would stay—I am sure.

A marriage can be weakened or strengthened by MS-by any chronic illness for that matter. There are all sorts of statistics about divorce and chronic illness and overall when the man has the illness the divorce rate is lower. I also read that the longer a couple is married the more likely they will stay together after the diagnosis of chronic illness.

We've been married for 16+ years. Shortly after my MS diagnosis I began to wonder if my husband would leave me. Wouldn’t he be better off without me? Why would he stay with someone who is flawed with illness when he could share his life with someone healthy?


I will have MS for the rest of my life (probably) and it will always affect our relationship in some way. And yet, he stays.

Is this the perfect love? I think what we have is a love we created over time that is perfect--for us.


This concludes the 85th edition of the Carnival.

The next Carnival of MS Bloggers will be hosted here on April 21, 2011. Please remember to submit a post (via email) from your blog of which you are particularly proud, or which you simply want to share, by noon on Tuesday, April 19, 2011.