Get Mad, Get Really Mad
by msrecess

“That’s so annoying.”  Those were the words I found myself saying to Mom today on the phone while she talked about an issue she was having with her ankles today.

As I was talking to her, something happened.  Instead of trying to solve her issues or getting sad myself, I told her ”that’s so annoying, Mom.”  And I just kept at it, like I was talking to a friend who was having a whole bunch of bad luck.  Taking the MS out of the equation.  I chimed in with her frustration and you could hear how frustrated I was for her in my voice.  Strangely enough, I think it helped.  In that moment I was on her side.  I wasn’t saying you should do this, you should try this, Mom it could be worse.  Instead I was on her side and I was mad at MS for her.  I was mad at life for her.

If I think of when I am having a period of bad luck and people tell me “it will be okay”…sometimes you just really want them to get mad with you.  Show you that you’re not alone and your feelings are justified.  As a self proclaimed ”problem solver” I have a tendency to try to fix these things before I allow myself to sometimes really understand what someone needs.  Sometimes people don’t need a solution, they don’t need a positive spin, they just want someone to get mad at life with them.  Without knowing this you actually help them more by not trying to fix their problem than fixing it.

So today I got mad at MS.  I got mad with Mom.  We chimed in together about how this is so annoying.  How much this sucks.  How Mom just can’t win.  It felt good.

Lesson learned: I think I will get mad at MS more often.

I Want to Scream
by msrecess

I feel overwhelmed. I feel frustrated. I feel upset. I feel mad. I feel hurt.  I feel so many things that my initial reaction to them is to ignore them.  I like to think I am pretty good at dealing with problems head on but this one won’t go away.  There is also no end in sight.  It’s a problem that I can’t discuss with many people nor do I want to discuss it with many people.  My mom has MS and it sucks.  It absolutely sucks.  I can’t get a handle on it.  I can’t.  I am admitting it.  I don’t even know where to begin to get a handle on it because it is constantly changing.  There are new symptoms, new emotions, new issues to tackle, constantly new.  They also aren’t my symptoms.  They also aren’t symptoms I totally understand.  They are new terms and phrases.   MS also brings decisions that aren’t mine to make.  They are Mom’s to make.  I have no control over a situation that is infiltrating every ounce of my life.  My lack of knowing what to do is driving me crazy.  I literally sit as my head fills with thoughts and have no idea what to do.  I just want to curl back into my shell and do nothing.  I just want this to go away. I just want to scream.


I Feel the Earth...Move...
by CJ of my MonSter Stories

Today was one of "those" days - when it seems as though someone might be sticking a probe in random areas of my brain and saying "Watch what happens when I do this!"  It was a very active day for what my neurologist calls "paresthesias", odd sensory disruptions that include tingling sensations and numbness, feelings of vibrations and/or electrical sensations in one or more body parts or my entire body, reduced sensation or heightened sensation.

At times, walking was difficult due to the intermittent numbness of the front part of my right foot combined with the sensation that I was stepping on golf balls.  Because of tingling and incoordination, I couldn't get my thumb and fingers working well enough to  pick up the dime and nickel to use for the parking meter.  Talking on the telephone was a problem because I was getting a shrill sound coming and going in my left ear and then my hearing would be diminished for several minutes at a time.

Sometimes the vibrations were so noticeable that I watched to see if other folks would say anything because I was sure we must be having an earthquake!  While sitting in a chair it felt as if the floor were vibrating beneath my feet and I could feel the sensation go through my body.  I was certain that everyone else had to be experiencing it too.

While preparing for bed, I was standing in the bathroom brushing my teeth.  Suddenly I felt the familiar rush of fatigue and weakness wash over me and it felt as if my entire body, to the core, had turned to Jell-O.  I've learned that it can happen at anytime, regardless of my level of activity, and there is nothing I can do to prevent it, fight it, or stop it.  I must lie down and do nothing...and so...I am.....


(Reposted by permission © Post by CJ Taylor.  Photo from NASA)

I’ve never liked that guy, Murphy, always showin’ up at the most inopportune of times in multiple sclerosis. Like last week, when I ventured out to grocery shop for a 10-person dinner party (one that catered to a) vegetarians and b) people allergic to onions, but that’s for another story). All seemed pretty darn smooth when I arrived at the store. I even got the chance to park next to an empty handicapped spot, which I always try to do if one is available—someone may need that extra access far more than I do. And then that dude showed up. Murphy. There was just one available scooter… and the battery was just about dead. 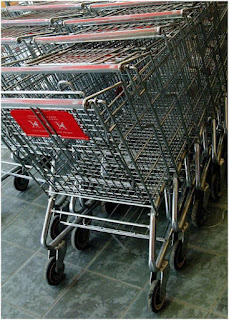 When I grocery shop these days I usually use one of the store’s Hoverounds. It saves the MS legs for needed work later in the afternoon and it prevents me from having to ask the staff to hunt down a chair for me if I bonk an hour into my shop. And that conversation always goes like this: “Chair? Why? I don’t think we have one.” I nod. “That’s okay, I’ll sit on the lettuce. It’s softer than the apples or potatoes.” A chair usually shows up rather quickly.

Of all days I really needed to save the legs, today was that day. I couldn’t wait and come back later—the rest of the afternoon was slated for mandatory cooking and dinner prep for the weekend. Worse, I had a big haul to get and Laura had just run out of allergy medicine at the peak of allergy season. So I came up with a plan. Using the near-dead scooter, I’d hit the pharmacist (located at the opposite end of the store from the fresh fruit and veggies) and then switch to a push cart and hustle. No prob, right? Wrong.

“Your prescription isn’t ready.” Fudge. The scooter was wheezing and I was at the wrong end of the store. So I plugged the scooter in at the pharmacy and waited. “The doctor hasn’t called us back, so we’ll page you when it’s ready.” Holy bat guano, Batman. So off I go back to the front of the store to drop off the electric slug only to get paged midway. Mother Mary Joseph Stalin. Turning around, I crept back to the pharmacy, plugged ‘er back in, and picked up the allergy meds. Could I make it back with the extra few minutes of bonus juice? Would I stall out in the middle of store, stranded? Should I cut my losses and just hit the beer aisle?

I finally made it back to the cart corral averaging 0.2 mph; I could have crawled faster. But I saved my leg gas for the main shop and I was ready to motor. And motor I did. It didn’t even bother me that they were out of cans of chicken broth—how does that happen?—and the first 48-oz box I picked up leaked broth all over me. (And for those wondering, “Dave, chicken broth has both a) chicken and b) onions,” don’t ask. The vegetarian makes an exception for broth and for some reason processed broth does not trigger the other’s onion allergy.)

So I swept down the aisles in blazing time, tossing items in the basket like Jordan raining threes. I finished, forgetting not a single item, and my legs still had ample power. Screw Murphy, I thought. I didn’t even have to pee. Oh, wait—I shouldn’t have thought that. The bathroom is on the total other end of the store. By the pharmacy. Murphy is such the a-hole.

“What are you doing back here, Mr. Bexfield?” I shooed off the smiley pharmacy staff as I focused on my destination. AND THAT DUDE WHO WAS ABOUT TO TAKE THE ONLY BATHROOM. “Dude!” He let me go first. Murphy, finally, had officially left the building.

I strolled back to the front, checked out with a gazillion Monopoly pieces (part of the store’s promotion), certain that one held the $100,000 grand prize. “It’s a million dollars, actually,” the clerk said. Double cool. And then I saw a woman my age with a family member (brother, husband?) who was in wheelchair unable to control it himself. “Are you playing Monopoly?” I asked. She was. I gave her my stack of tickets and walked out to my car. She soon followed me out… to her accessible van in that last handicapped space.

Thanks, Murph, sometimes you aren’t so bad after all.


This concludes the 112th edition of the Carnival.  The next Carnival of MS Bloggers will be hosted here on April 26, 2012. Please remember to submit a post (via email) from your blog of which you are particularly proud, or which you simply want to share, by noon on Tuesday, April 24, 2012.