Goodbye Rebif
by Ivy at Life with MS and EDS

In a modest white house,
There was a fridge with blue containers
Stocked with hated Rebif shots
and a woman sick of dealing with…

Goodbye hate and fear.
Goodbye drinking til my pee is clear.

Goodbye six full sharps containers that live on top of my fridge.
(Oh wait, I’m stuck with those since no one will take them from me!)

Here I come, Gilenya! Hope you and I get along well!
(Obviously inspired by, “Goodnight Moon”)


No Exchanges or Refunds
by Karen of Meandering...One moment please

You know what I've been thinking lately...

About two years ago Grace went through a phase where she believed that there were monsters in her room.

Not just under the bed, not just in the closet or behind her door.

No, she believed that they came in through the night, from where we don’t know, but she believed in them and we let her and we took the necessary precautions to make her feel confident that the monsters wouldn’t be welcome in her room.

She couldn’t write or read at this point but she knew what it said:

She decorated it and we hung it up on her door so that at night, when it was closed, the monsters knew to turn around and go back from where ever it was that they came.

And it stayed there.

It didn’t come down during showings on the house.

It didn’t come down until moving day morning and only then to be re-hung on the door to her new bedroom.

She still believes that monsters are a threat to her sound sleep. To her security. And although she’s never seen a monster, she knows that the risk is far too great to not hang a sign.

It’s astounding how much adults underestimate the intuition of a child.

It’s no secret that I do not have a spiritual, mystical or religious system of beliefs and that I am an agnostic.

But there is something, somewhere deep inside me, that believes that sometimes things are more than coincidence.

Not more than six months after hanging that sign, I, Gracie’s Mum, was diagnosed with MS.

And, it is in fact a monster.

It goes unseen, unheard, unfelt, for months. But you know it’s there.

And we live with this monster, the three of us, every day.

It lurks behind doors, at the top of stairs, at the bottom of hills.

It laughs as I get in and out of the tub, daring me to slip and fall.

It nags me and taunts me whenever I walk from a smooth surface to rough waiting for me to lose my footing.

It waits patiently in the dark for the last minute before spoiling a long planned family outing with unexplainable  fatigue or dizziness or lack of balance or all of the above mixed together in a toxic cocktail that can only be cured by a few days in bed.

And in spite of all the signs, or ropes of garlic, or crucifixes, séances or exorcisms, this monster, although not allowed, not invited, will still come through every and any open door in our lives.

It’s the in between times that matter.

The time between visits from this monster that matter the most.

Also, the comfort in knowing we are not the only family being plagued by such a terrifying monster sometimes does more than any sign could.

Knowing there are others out there, like us, going about their business, planting gardens, planning trips, getting ready to shop for back to school stuff, all the while looking over their shoulder, under beds, behind doors and in closets, is often enough to get though the paranoid induced moments in our lives.

MS is a monster in our lives, and in the lives of many others.

MS is a monster in Jeff and Sarah's life. And they have a team fighting this monster. And that team raised thousands and thousands of dollars to pay him to get the hell out of their lives.

But, we are not hiding him under a bed.

We will continue to show him off and talk about him, and write about him and lure him out of his hiding and take him for a long walk raising thousands of dollars to show him how much we hate his guts.

And if that doesn’t work, then there is always Gracie’s sign. 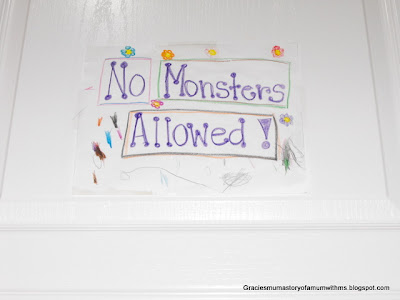 Happy Hump Day and don’t forget to look under your bed tonight before turning off the light! 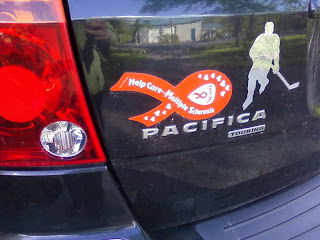 Some time ago, I wrote about my beloved MS Magnet.  Capitalized, because it meant that much to me.  You see...my tailgate magnets tell an abbreviated story.  A story of me!  I think of car magnets as old skool "colorforms", but for grown ups.  Oh how I loved to play with colorforms.

Admittedly, some folks overutilize.  You've seen this, right?  I was behind one today.  They had quite the collection of hot vacation spot abbreviation stickers and assorted magnets.  I can play that game, too!  If they made stickers that said "WORK" and "BATHROOM" and "HOME", I could put 'em on my tailgate, 'cause those are the hot spots I frequent most;-)  Furthermore, there should be ample space for each magnet.  It's cumbersome to digest as I'm waiting for my light to turn green.  I'll bet when they were kids, they used 2 sets of colorforms, thereby overcrowding and discombobulating the scene they were attempting to create.  But I digress...

I had MS Magnet when I walked from my car to the store.  Twenty-five minutes later, I returned with my groceries, reached for the liftgate handle, and saw a dingy outline of where MS Magnet used to cling.  I let out a fairly loud, "WHAT THE!", followed by, "OH COME ON!  SERIOUSLY???"  I rubbed my blurry left eye, hoping it was a trick.  I looked on the ground, hoping it fell off.  I knelt down to look under the car.  I looked closer at the dingy outline and noticed clean smudges on my dirty car.  Smudges in which fingers were.  Suddenly, it became crystal clear.  MS Magnet was...taken.  I was so angry that I wanted to throw my carton of eggs on the ground in frustration.  Because when I get that angry, I throw stuff.  Alas, I forgot the list on the counter again.  The list those eggs were on.  And so I forgot to buy eggs.  Thankfully...

I bid you farewell, MS Magnet:'-(  I had a sinking feeling that our time together would be limited.  So many people commented on you, asking where it was I got you...they knew someone with ms and wanted you to ride around with them in order to honor that person.  Even my husband has one just like you, which surprised me.  You figure...me, him, and ms are stuck together for the rest of our lives.  It's the whole "in sickness and in health" deal.  You'd think the last thing he'd want would be anything ms-related stuck to his truck.  Though he sacrificially offered that magnet to me as a replacement, I cannot accept.  Losing you is hard enough.  I cannot risk a rinse and repeat occurrence.

"Sooner or later in life, the things you love you lose" - Florence + The Machine

accessible fruit: donut peaches
by Patrick of Caregivingly Yours

Accessible fruit! Who would have thought?

With Patti’s Multiple Sclerosis progression holding and eating some of her favorite foods has become too challenging. As her spouse caregiver, I am always on the look out for solutions and options that can enable her.

Stopping at a road side fruit stand I discovered Donut Peaches (aka Saturn Peaches, aka Angel Peaches, aka Chinese Pan Tao Peaches).

Patti loves peaches. However MS progression was making holding and eating a peach next to impossible. That is until we tried “accessible” donut peaches! They were a hit, easy to hold and easy to eat!

Don’t just take our word for it. Mother Earth News offers the top reasons to eat a Donut Peach:

1. They taste better than other peaches. They're sweeter, with almond overtones.
2. They are lower in acid than other peaches.
3. The pit doesn't cling to the flesh, so it's easy to pop out with your thumb.
4. The fruit's thin, red skin has little or no fuzz.
5. Their small size lends itself to being eaten out of hand.

You just have to like a snack high in Vitamins A and C and only 37 calories per peach.

Thank God when nature lends you a hand.

... and unlike the summer of 2009, this summer they are readily available in the produce section of Giant Food grocery stores at least here in Pennsylvania.


This concludes the 94th edition of the Carnival.

The next Carnival of MS Bloggers will be hosted here on August 18, 2011. Please remember to submit a post (via email) from your blog of which you are particularly proud, or which you simply want to share, by noon on Tuesday, August 16, 2011.